By LeChienAndalous in Granada with 0 Comments

Valencian artist Joaquín Sorolla (1863-1923) has returned to the Alhambra this summer with his Gardens of Light, a travelling exhibition that will have three different settings: the Palazzo dei Diamanti, seat of the Gallerie d’Arte Moderna e Contemporanea di Ferrara (Italy), the Palace of Carlos V Museum of Fine Arts, in Granada, and Madrid’s Sorolla Museum. 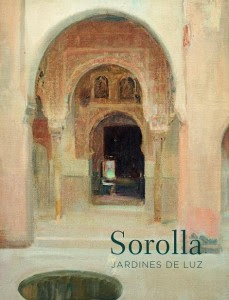 The exhibition, commissioned by a committee of experts made up of Tomás Llorens, Blanca Pons-Sorolla, María López Fernández and Boye Llorens, aims to show Sorolla’s fascination with gardens, fortified after his trip to Andalusia and, particularly, his experiences in the Alhambra, and the impression caused on him by the Sierra Nevada with its white blanket of snow.

The exhibition retraces the encounter between Joaquín Sorolla and Andalusia – its millenarian culture, the landscapes of the Sierra Nevada, the Arab courtyards and gardens of the Alhambra, and the Alcazar of Seville all providing inspiration and material in the form of clear, lyrical visions. In these compositions, human presence is banished and flora, marble, tiles, light and colours all come to life. The artist’s brush conveys reflections on water, light filtering through and dissolving geometrical architecture, and the colourful mosaic of the southern garden.

Sorolla. Gardens of Light is broken down into five sections (Earth, Water, Courtyards, Gardens, and the Garden of the Sorolla House), all contributing, without a doubt, to a better understanding of the work of the Valencian painter, who continued to reflect on the possibilities of his art until the very end of his life. The exhibition focuses on a crucial moment in the creative life of the painter, the years of his full maturity and, specifically, the works arising from his fascination with gardens and his meeting with Andalusia, which affected him so deeply as to make him remodel the poesy and style of his work in his later years.

After his visit to the Alhambra in 1909, Sorolla painted vistas of the Alhambra and Generalife time and time again, including Torre de los Siete Picos, the Court of the Myrtles, the Lindaraja Mirador, the Comares Court and the Garden of Daraxa, this last dated to 1917.

In Andalusia, Sorolla, considered one of the most fascinating figures of the Spanish art world of the 19th and 20th centuries, discovered a subdued richness, a source of poetry, contained in shady corners, the murmur of water in the fountains and in the silence of sun-bathed courtyards. His own garden, planned and laid out at that time, further transmitted and amplified his metamorphosis.