In order to help consumers know at a glance the origin of Spanish Iberico hams bought in specialised stores and supermarkets, a new tag system has come into force in January 2014. The colour scheme will classify each ham into one of four groups and is part of a number of other changes being introduced.
The new system will appear over time, as current stocks in stores need to be sold first. These new labels will be placed on the hams in origin and there will be greater emphasis placed on the need to be able to trace each animal by means of a “genealogical book”. The overall aim is to reinforce consumer confidence in a market that has suffered from over-production and an important drop in sales during the recession.

Spanish hams will be sold with one of the following four colour codes: 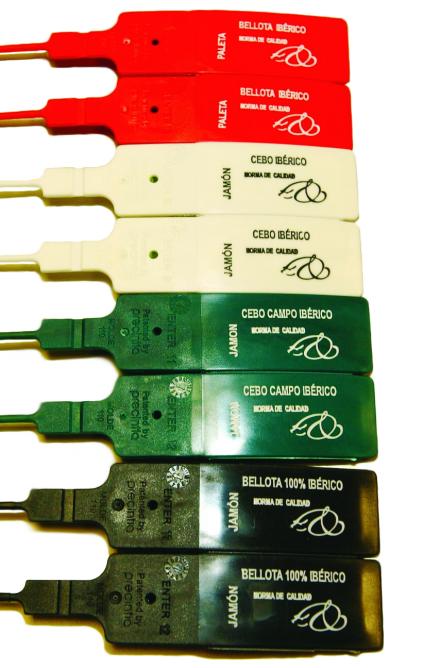 What Other Changes Are Included In The New System?

The changes also include limitations on images, logos and symbols used on labels to avoid indicating a type of ham different to that being sold.
The labelling rules will not only be applied to iberico hams but will also be extended to other pork products too such as paleta and lomo. If you’re not sure about the difference between “jamon” and “paleta”, remember that jamon refers to the hind legs whilst paleta is for the smaller front legs, a typical jamon weighs around 7.5 kg and a paleta around 5 kg.

How Will Consumers Benefit?

As well as knowing immediately they type of ham being sold without having to interpret vague information, the new labelling system will also make it easier for consumers when comparing prices between different products. Remember that in most stores the salesperson will be able to help you decide between different hams and that you can taste the ham before buying.

Famous ham regions in Andalucia are:
The Alpujarras: Ham from Trevélez
Huelva: Ham from Jabugo