Now Christmas time is arriving and in every village and in every house in Andalusia people will install as usual their belén, or nativity scene. Apart from Maria, Joseph and the baby Jesus, these scenes always go accompanied by the three kings, Baltazar, Melchor and Gazpar bringing their presents to Jesus: gold, mirre and incense.

The kings come every year on the eve of th 5th of january at dusk to bring their presents. In some cities they even come on camels or donkeys, but nowadays most of them come on a motorised vehicle. They and their pages throw lots of sweets to all the children attending the parade.

That evening you have to put some anisette for the kings and some hay for the animals on the nativity scene and the shoes of the children, so that the kings can leave their presents there.
The sixth of january is a bank holiday and everybody sits down to enjoy the presents and the ‘Roscon de Reyes’ a special cake which contains an image of the king or the virgen Mary (which means luck for the coming year) and a bean (which means that you have to pay the ‘Roscon’ the next year). 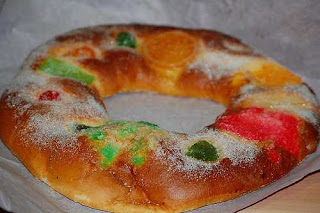