Weather and climate in Andalusia

Weather and climate in Andalusia

Many people want to know details of the climate in Andalucía.

The thing is that the weather varies a lot, depending on being in the coastal area or more inland. In west Andalusia or east Andalusia and how high the place you want to visit lies.
In general in de west part of Andalusia there is more rain than in the east part.
Generally there is more rain in the months of November till February,  but average is 6 to 8 days a month in winter!
In the coastal areas the temperatures are milder than inland Andalusia.
On the coast medium temperatures vary between 10ºC till 30 ºC and inland they may vary in Granada from 1ºC till 33ºC and in Sevilla from 5ºC till 35 ºC.
The amount of sunhours varies from 2500 hours in the Tarifa area to 2800 till nearly 3000 hours in Seville, Cordoba, Granada and Almeria area. 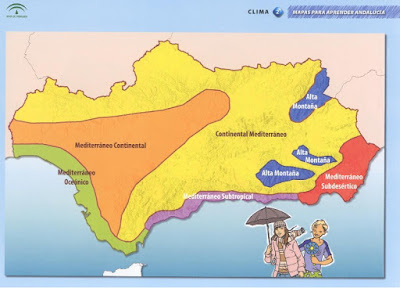 There is a magnificent Spanish website about weather and climate from the official Institute of Meteorology. Here you can find nearly anything you want to know, because all the weatherfigures of the last 40 years are included.
The website is called www.aemet.es
You can find weekly weatherforecasts for nearly every village, region, coastal or mountainous area in Andalusia here
Details about the climate in Andalusia (some spanish knowledge is necessary) you can find here