Game of Thrones in Andalusia

The dramatic karst scenery of El Torcal national park in Andalucia has been chosen as a key filming location for the new NBC fantasy drama series,Emerald City, to be based on L. Frank Baum´s classic novel, The Wonderful Wizard of Oz. The locations selected are El Torcal province Malaga, Cabo de Gata National Park near Almeria; the Castillo de Calahorra and Guadix caves north of Granada; and the Alcazar palace in Seville. 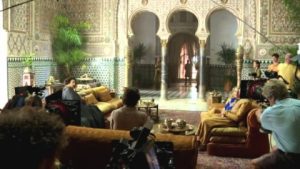 Filming Game of Thrones in Seville´s Alcazar palace (Canal+).
The new series is described by NBC Chairman Robert Greenblatt (on entertainment website Collider) as “a modern re-imagining of the L. Frank Baum books…a thrilling, more epic telling of the stories”. “Swept up into the eye of a tornado, 20-year-old Dorothy Gale is transported to another world – a mystical land in great peril, where an all-powerful wizard has forbidden magic and rules over many kingdoms. This is the fabled Land of Oz in a way you’ve never seen it before, where lethal warriors roam, wicked witches plot in the shadows and a young girl from Kansas becomes a headstrong heroine who holds the fate of their world in her hands”, reads the NBC plot summary.
The lead roles of Dorothy and the Wizard will be played by Adria Arjona (True Detective, Person of Interest) and Vincent D’Onofrio (Law & Order: Criminal Intent, Full Metal Jacket, Men in Black, Jurassic World, The Cell), while the series will also star Oliver Jackson-Cohen from TV drama Mr Selfridge. Emerald City will be directed by Tarsem Singh (The Fall, Immortals, The Cell) while the producer is Peter Welter Soler of Malaga-based Fresco Films, who also worked on filming Game of Thrones in Spain.
El Torcal and Karst scenery in Andalucia
Known for its dramatic landforms including limestone ‘stacks’, El Torcal (see main photo) is one of the most impressive karst landscapes in Europe.  Designated a Parque Natural in 1989, El Torcal’s 17 square km are also home to the Spanish Ibex (mountain goat), foxes, Griffon vultures and several species of Eagle; along with 30 species of orchid, Maple, Mediterranean Holm Oak and Hawthorn trees. 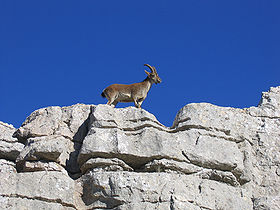 Spanish Ibex in El Torcal national park (Wikipedia).
El Torcal is located close to the historic town of Antequera north of Malaga, and easily accessible from the A-45 Malaga/Cordoba motorway, near the village of Villanueva de la Concepcion. For those who like hiking, there are three different marked trails (from 1-3 hours) with stunning views and impressive ammonites too; plus there´s a visitor centre and café/restaurant with a nice terrace. See Gallery of Photos of El Torcal. 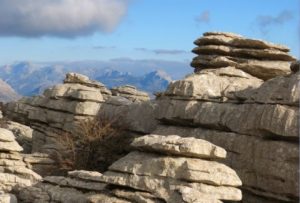 El Torcal natural park near Antequera, Andalucia.
Close to El Torcal, the Sierras Subbeticas Natural Park is another beautiful Karst region of Andalucia and remains surprisingly “off the map” for visitors, despite having been designated a Global GeoPark by UNESCO 10 years ago (in 2006) for its exceptional geological heritage. 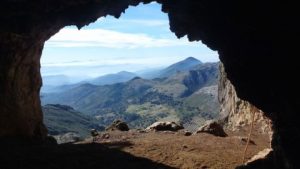 Cueva del Morrion, near Priego de Cordoba in the Sierras Subbeticas (Wikiloc).
It is hoped that Emerald City, along with Game of Thrones Series 6 (also just filmed here in Andalucia), will help bring Andalucia´s natural and manmade wonders to an ever-wider audience. Seville has enjoyed a record year in 2015 with a 25% increase in visitors thanks to the “Game of Thrones effect”.
Game of Thrones Series 6 locations in Spain
The Alcazar palace and gardens in Seville provided the backdrop for Game of Thrones Season 5, with the palace´s stunning tiled rooms and courtyards featuring in no less than four episodes. And it´s also just been the setting for the forthcoming Series 6, along with Almeria´s Alcazar fortress and the Sierra Alhamilla in the Tabernas desert, where Ridley Scott´s biblical epic Exodus: Gods and Kings was also shot. Other Spanish locations used for filming Season 6 were Girona, Castell de Santa Florentina castle (Barcelona), the semi-desert region of Bardenas Reales (Navarra), Zafra castle (Campillo de Dueñas, Guadalajara) and Peñíscola castle (Castellon).
* See Shooting in Spain featuring Elijah Wood, a Spanish Film Commission video about filming in Spain: More reasons why film directors (and holiday makers!) should chose Spain!
Houses of Le Chien Andalous near the mentioned locations:
See: our locations in Malaga Province, Almeria and Cordoba in English
In German: Malaga, Almeria and Cordoba
in French: Malaga, Almeria and Cordoba
in Dutch: Malaga, Almeria and Cordoba